David Bowie to Broadway: Dan Wilensky back in Berkeley 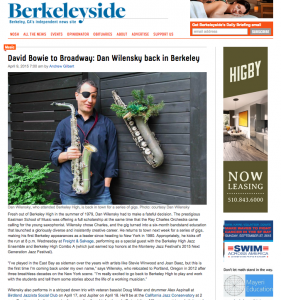 “Fresh out of Berkeley High in the summer of 1979, Dan Wilensky had to make a fateful decision. The prestigious Eastman School of Music was offering a full scholarship at the same time that the Ray Charles Orchestra came calling for the young saxophonist. Wilensky chose Charles, and the gig turned into a six-month bandstand education that launched a gloriously diverse and insistently creative career. He returns to town next week for a series of gigs, making his first Berkeley appearances as a leader since heading to New York in 1980. Appropriately, he kicks off the run at 8 p.m. Wednesday at Freight & Salvage, performing as a special guest with the Berkeley High Jazz Ensemble and Berkeley High Combo A (which just earned top honors at the Monterey Jazz Festival’s 2015 Next Generation Jazz Festival)…”